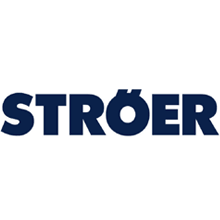 Ströer is a leading German provider of out-of-home (OOH) media and offers advertising customers individualized and fully-integrated, end-to-end solutions along the entire marketing and sales value chain. Its portfolio includes all forms of out-of-home media – from traditional poster media and exclusive advertising rights at train stations, through to digital out-of-home media. Whereas a decade ago, Ströer only operated analog media systems, the group currently markets and operates around 300 LED boards and 4000 digital totems, which reach an estimated 30 million people each month.

The digital totems usually contain a 60” to 70” screen, a VPN-connected PC and some network components, including an Ethernet switch. For a long time, a data transmission of 100 Mbps (Fast Ethernet) and limited functionality were sufficient, but due to the increasing requirements related to data communication and resolution, Ströer had to look for 1000 Mbps (Gigabit) Ethernet switches with a more extensive functionality.

The Ethernet switches had to be able to withstand extreme temperatures and different weather conditions as the digital totems can stand both indoors and outdoors. They also had to be small in size to fit into the screen enclosures, and designed for 24/7 operation. But most importantly, the switches had to be manageable to provide multicast data transmission.

Ströer looked at various alternatives in the market, but in the end an Ethernet switch from the INDRy portfolio of Black Box, the LIG1014A, was chosen. Not only because this industrial managed Gigabit Ethernet switch met all requirements, but Ströer – who already knew Black Box as an experienced and reliable partner – saw a big advantage in the technical and sales support of Black Box.

Furthermore, many of Ströer’s earlier Ethernet switches were designed for one specific type of fiber, speed or wavelength, with no flexibility. In contrast, the INDRy switches can be used depending on existing network infrastructure and needs, if necessary in a wild mix.

“We use Black Box network components since 2 years with nearly all digital advertising media and plan a product like the LIG1014A switch at construction stage”, says Christian Schulz, VP PVO Support at ECE flatmedia GmbH. “In the past, the components in the network were transparent, making fault analysis and remote containment much more complicated. Through our complete monitoring by NAGIOS, errors in the planning of an on-site application or during commissioning can be excluded.”

Ströer is delighted with their choice for Black Box and its INDRy switches. Currently Ströer has equipped 70 of its indoor and outdoor digital totems – but also large LED boards – with the LIG1014A and the continuous installation is planned into the production process of each new digital media system.

“The open communication and the fact that they can think along in the solution process, ultimately led us to opt for Black Box.”