Knowing the USB standard supported by your devices will help you set your performance expectations. Read this article to learn about the transfer speed and design of each USB Standard.

The evolution of USB standards from 1.1 and 2.0 to 3.x has resulted in changes in appearance, data rates, and cable lengths. Knowing the differences between these standards will help you identify the USB standards of host and peripheral devices and determine their capabilities.

All USB standards can use the same connectors. The color of the plastic inside the connector indicates the USB standard the device or cable is capable of obtaining. USB 1.0 is white, USB 2.0 is black, and USB 3.0 is blue. Connectors with red plastic inside always remain active regardless of the state of the USB connection (for example, active, standby, or sleep) for charging applications.

November 2008
The new USB 3.0 standard allowed for data rates up to 5 Gb per second, also known as SuperSpeed.

September 2017
The latest USB standard, USB 3.2, has a data rate of 20 Gb per second. With USB 3.2 superseding the older USB 3.x specifications, the USB group came up with a guideline to explain the differences: 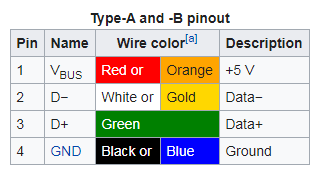 USB 4.0: The Next Generation of USB

In late 2019, the USB 4.0 specification was published. This next-generation USB standard is likely to appear in devices in late 2020 or early 2021. Several companies are currently involved in the development of the standard, especially those behind the USB Promoter Group. USB 4.0 builds on the architecture of USB 3.2 and USB 2.0 and is based on the Thunderbolt protocol, recently released by Intel. The standard will double the bandwidth of USB (up to 40 Gb per second) and allow multiple data and screen protocols to be used simultaneously.

Knowing the USB standard supported by your host and peripheral devices will help you set your performance expectations. As with any system, performance is always dictated by the device with the lowest speed and capacity in that system