Environmentally-conscious Returkraft recycles ordinary household and company waste and turns it into energy. Serving 23 Norwegian municipalities in Agder and Telemark, the incineration plant receives approximately 130,000 metric tonnes (143,300 tons) of residual waste per year. Returkraft recovers 63% of the energy in the waste received. The treatment plant is comprehensive and high-tech, and its emissions are among the lowest in the industry.1 Nordlo offers IT and digitalization services for companies and public sector activities in the Nordic region, at regional, national, and international levels.2

Last June, the Returkraft plant suffered an explosion that completely destroyed their control room. The company was faced with the challenge of building a temporary control room to monitor and access targets in a technical room. Safety was paramount for the new control room. Because there were a limited number of infrastructure cables between the two locations, an IP solution was the only way to go.

Returkraft selected Nordlo as their system integrator to design and implement a solution within only three months. Nordlo contacted Black Box since they had a good experience with us in a previous collaboration through an offshore end customer. 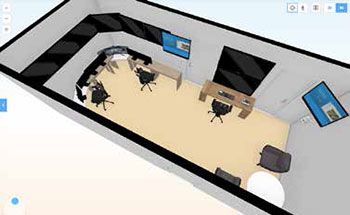 In September, when all fire evaluation work was completed, Returkraft was ready to start rebuilding.

Black Box, working with Nordlo, suggested a standard point-to-point KVM over IP solution using Emerald PE extenders connecting the systems and operators. Replacing the damaged equipment, the Emerald PE transmitter and receiver units are installed in the temporary control room and server room with future plans to deploy the same setup in the planned new permanent installation. This is step one on the road to rebuild a new control room.

We deployed a total of 13 Emerald PE transmitters in the server room and 13 receivers in a mix of single- and dualmonitor units in the control room. Considering the limited cable infrastructure, Black Box recommended the installation of a Central Power Hub at each location.

Returkraft now enjoys point-to-point KVM extension over a limited number of infrastructure cables, including power and network redundancy. The new solution extends the same number of KVM signals over a fewer number of cables. Offering a glimmer of hope for the planned permanent control room restoration, the Emerald PE/Central Power Hub solution will allow for future matrix switching as well as support for virtual machines. The products will be repurposed into the final control room scheduled for 2022.

Returkraft was impressed with the ease of installation. Both Nordlo and Black Box supported the end user with technical know-how, and Nordlo installed the system on-site meeting the given short timeline.

Kim Slotten, Project Manager with Nordlo, commented, "I experienced Black Box as extremely service-minded, and they are concerned with delivering the right solution to the customer's needs. We received good follow-up from start to finish in the project, where the supplier was also involved as an advisor to the customer to identify real needs. As a result, we received delivery without surprises along the way, and the redundant Emerald PE solution is the end the customer is brilliantly satisfied with."