What Is Power over Ethernet in Networking?

Power over Ethernet (or PoE) delivers electrical power to PoE-enabled devices using CATx network cables. Because you don’t need to run electrical wiring, PoE saves money in materials and installation time. It’s also flexible, especially for remote applications, since it doesn’t require a nearby electrical outlet. These and other benefits have led to a sharp increase in popularity in recent years. However, the limiting factor has always been power.

How Does PoE Work?

The original IEEE 802.3af-2003 PoE standard provides up to 15.4 W of DC power on each port. The updated IEEE 802.3at-2009 PoE standard, also known as PoE+ or PoE plus, allows for up to 30 W of power to Type 2 devices. That’s sufficient power for devices such as VoIP phones, wireless access points, and security cameras. But it’s not enough for technology like flat screen displays, LED lighting, or retail POS terminals.

To meet the demand for higher power, the IEEE released a new PoE standard at the end of 2018, to significantly increase capacity. IEEE 802.3bt allows for up to 60 W to 100 W of power at the source by providing power over four pairs of wires (compared to the previous technology’s ability to power over just two pairs). This increase in power allows you to use PoE for a greater range devices and applications. As an added benefit, the new standard will boost energy efficiency by minimizing power loss in the cable, potentially cutting power loss in half.

The new standard will include support for 2.5GBASE-T, 5GBASE-T and 10GBASE-T, while existing standards have a maximum speed of 1-Gbps. This new support will create intermediate data speeds between existing standards.

Type 4 (another designation is high power PoE) offers the highest power capabilities, potentially up to 100 W of DC power (71.3 W to each device), and can support flat screens and laptops. For more detailed specifications on PoE Type 4 and other types, you can refer to the following table. 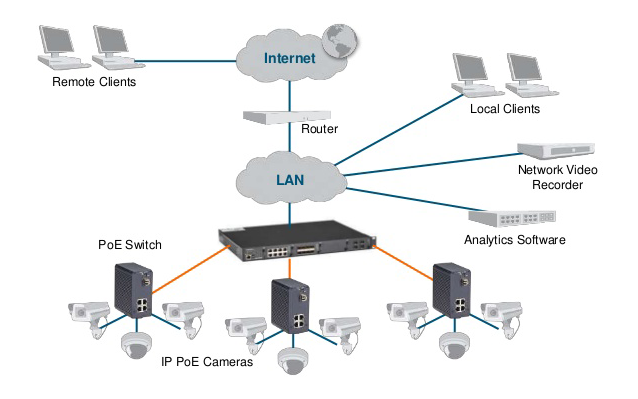 Black Box offers a wide range of PoE products that allow you to take advantage of higher-power capabilities of PoE such as the following:

PoE Ethernet Switches can act as power source equipment (PSE) besides their usual functions. They inject power into the Ethernet cable to power the attached PoE-enabled devices such as wireless access points and security cameras. Find out more about PoE Ethernet Switches.

Enable extension of PoE connections beyond the 100-meter limit to access far away PoE devices such as access points, cameras, and VoIP phones. Find out more about PoE Repeaters / Extenders.

PoE Media Converters are the ideal way to extend your network over fiber or copper and also provide power to remote PoE devices to long-distance data links. They act as a copper to fiber converter and PSE all in one device. Find out more about PoE Media Converters.