HDMI 2.1 changing AV with 8 K/10K resolution, faster refresh rates, increased cable’s bandwidth (up to 48 Gbps) and more. Find out all you need to know about this new Pro AV cable technology.

There are some radical changes in HDMI 2.1, the most recent update to the HDMI specification. HDMI 2.1 supports higher video resolutions and faster refresh rates, including 4K 120, 8K 60, and even 10K, as well as Dynamic HDR formats by increasing the cable’s bandwidth from HDMI 2.0’s 18 Gbps up to 48 Gbps and beyond. But what enables HDMI 2.1’s increase in bandwidth and performance?

In this article, I will explain the HDMI 2.1 physical layer changes and compression schemes. I will also detail how to check HDMI 2.1 signal quality.

Resolutions that use Display Stream Compression (DSC) technology, like 8K at 120 Hz and 10K at 120 Hz, are only available in fixed rate link of bandwidth (FRL) mode. I’ll explain this more in a later section.

The resolutions marked with an asterisk in Figure 2 use Display Stream Compression. DSC technology transmits the video frame from the source encoder, then the compressed image is split into slices (DSC compressed data). Each slice is an independently encoded partition. After splitting, every slice is decoded at the sink end. Figure 3 explains how DSC works.

Transition-minimized differential signaling (TMDS) technology is used to transmit high-speed serial data. Silicon Image Inc., a member of the Digital Display Working Group, developed TMDS in 1999. The PanelLink TMDS protocol was first used with DVI, and then it was added to HDMI. Today, HDMI 2.0 and all previous HDMI versions use TMDS. The diagram below shows how HDMI uses TMDS to transmit different types of data. 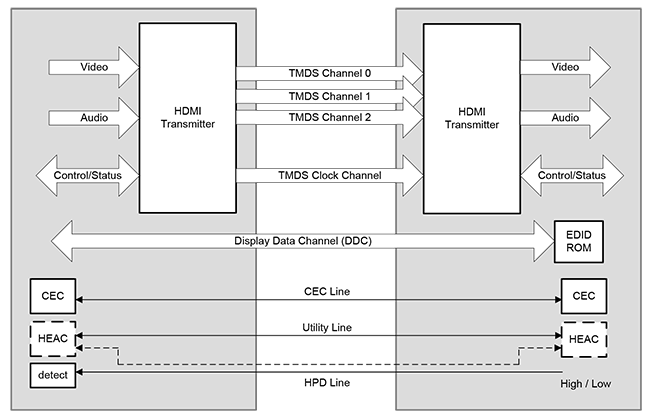 HDMI TMDS uses channels 0 and 1 as well as lanes 2 and 3 to transmit  digital audio, video, and auxiliary data. Lane 4 is the TMDS Clock channel that does not transmit any audio, video, or data. TMDS Clock is a frequency reference for data recovery on the three TMDS data channels (channels 0, 1, and 2). This TMDS Clock typically runs at the video pixel rate.

HDMI 2.1 does not use TMDS. It uses the new FRL encoding scheme. Through Link Training, HDMI 2.1’s FRL technology can use three or four lanes at 3 Gbps per lane to 12 Gbps per lane for a maximum composite bit rate of 48 Gbps. TMDS encoding can only use three lanes. HDMI 2.1 is backward compatible with previous HDMI specifications, therefore, FRL has a three lane mode. In table 1, you can see all the bandwidths of FRL lane link rates. 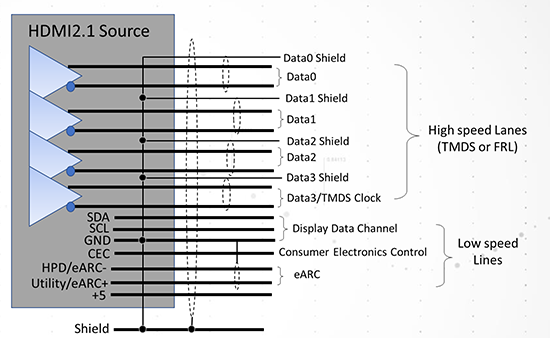 FRL does not require a clock channel like TMDS does. The clock is embedded in the data3 lane (Figure 5), and its information is extracted by clock data recovery (CDR). CDR is the process of extracting timing information from a serial data stream.

Before HDMI 2.1, each TMDS channel ran a 10-bit sequence. TMDS encoding is based on an 8-bit to 10-bit algorithm. This algorithm is only 80% effective because each 10-bit character contains 8 bits of pixel data. The 9th and 10th bits are the only encoding bits.

Here is a table that lists the differences between HDMI signals:

The quality of an HDMI Clock-Data signal can be determined by using a Mask Test. In the Mask Test trace, there should be an open eye shape that avoids the blue eye mask boundary area where signal degradation that can lead to image errors occurs. Take a look at Figure 7 to see the “eye opening,” or region of valid data, that meets the limits of eye opening, as defined in the HDMI 2.1 spec. 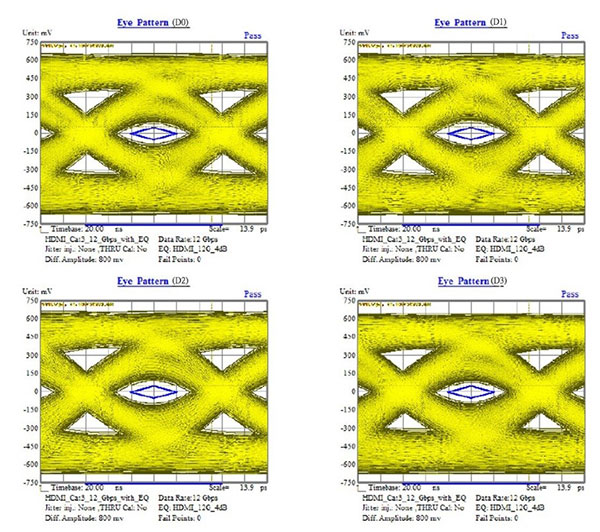 The HDMI 2.1 specification is a new architecture that delivers a higher-quality AV experience. The main reason it’s able to output better video than previous specifications is it gets rid of DVI technology to embrace the full four lanes of FRL. 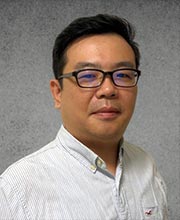